10 Years After: On Reporting the Beginning of the Iraq War

In early 2003, I was among a hundred or so journalists who would every day engage in reportorial Q&A sessions at the U. S. Central Command (Forward) media center. The briefings took place in a million-dollar “media briefing warehouse” constructed on Camp As Saliyah, a Qatari military base in a desert outside Doha. 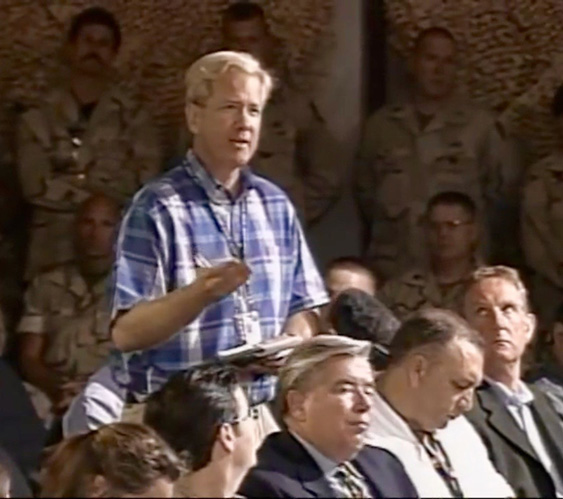 At the time — and even on reconsideration a decade later — it was a surreal exercise. Rather than being progress reports from the senior headquarters closest to fighting in nearby Iraq, the briefings devolved into embarrassingly simplistic presentations of talking points originating in Washington. While ostensibly run by a group of respected military public affairs officers, the Doha effort was truly marshaled by a handful of political appointees.

Michael Wolff of New York Magazine etched the definitive sketches in this article describing the sterile setting in which we tried, with little success, to obtain substantive information useful to our news audiences during the first weeks of the Iraq war. In this column, he described the uproar that followed his exchange at one of those briefings with Army Brigadier General Vince Brooks. Brooks — and others presenting from the center’s $100,000 video monitor-and-CentCom-logo-festooned stage — were offering little information about ongoing savage battle, but did have a dubious story for us about the rescue of Army Private Jessica Lynch, and lots of photos of Iraqi children offering “thumbs up.”

General Brooks: “Please, in the center.”

Michael Wolff: “I’m Michael Wolff from New York Magazine. I mean no disrespect by this question, but I want to ask about the value proposition of these briefings. We’re no longer being briefed by senior-most officers. To the extent that we get information, it’s largely information already released by the Pentagon. You may know that ABC has sent its senior correspondent home. So I guess my question is, why should we stay? What’s the value to us for what we learn at this million-dollar press center?” (Applause.)

Over time, expectations scaled back to the point that my goal became simply to try to ask good questions — hoping they, irrespective of official answer, might prompt listener and viewer thinking about the project of concentrated violence being launched by the U. S.

Did I succeed?  You can click here to see and hear a few of my attempts.